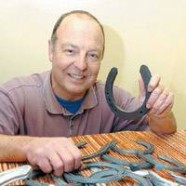 Simon Curtis is currently the Immediate Past Master of the Worshipful Company of Farriers (2001-2002). He is a Fellow of the Worshipful Company of Farriers by examination. Based in Newmarket, Simon has been a farrier since 1972. He is a 4th generation farrier. His family have been farriers and blacksmiths on the Cambridgeshire and Suffolk border for at least 150 years. He has lectured and demonstrated farriery in 16 countries on 4 continents including the USA, Australia, India, and Dubai. He has published 2 text books about farriery. He has been published in numerous journals. He has been awarded an Honorary Associateship of the Royal College of Veterinary Surgeons. This is the first time that any farrier has received such an honour. The Royal College of Veterinary Surgeons describes the Honorary Associateship as “the highest honour which it is possible for the College to award to anyone who is not a member. In 2005 Simon was inducted into “The Farriers Hall of Fame” in the Kentucky Derby Museum, Louisville, USA.
Qualifications: DipWCF 1983, AWCF 1987, FWCF 1990.
Awards: Honorary Associate of the Royal College of Veterinary Surgeons, Honorary Farrier, Victoria Racing Club, Australia, member of The Farriers Hall of Fame.
Visiting lecturer: Veterinary School at Cambridge University, The British Racing School and The British National Stud.
Author: Farriery-Foal to Racehorse, 1999 (sold in 40 countries)
Co-author: Corrective Farriery – a Textbook of Remedial Horseshoeing, 2002.
The Horse’s Foot, 2000, (CD-ROM)
Peer Review Journals: Equine Veterinary Journal, Veterinary Clinics of North America, UK Vet
Farrier Journals: The Forge, American Farriers Journal.
Other publications: Pacemaker, Thoroughbred Breeder, and The Irish Thoroughbred Breeder.
Professional Bodies: Examiner, Worshipful Company of Farriers, the Craft Committee WCF (chairman 1998-2001. Farriers Registration Council (statutory body)
(1990-1996); Chaired Visitation Committee (inspecting training colleges and examinations. Member of the Court of Imperial College

We use cookies to ensure that we give you the best experience on our website. If you continue to use this site we will assume that you are happy with it.Ok